Oksana Sidyagina is the winner of the 1st prize at the Rencontres Internationales de la Harpe en Ile de France 2018, partner of the International Harp Contest in Italy Suoni D’Arpa. Her concert prize will be in Saluzzo during the Festival Suoni D’Arpa, 4 September, and she will play Impromptu by Glière, Sarabanda e Toccata by Rota, Sicilienne variée by Damase and  Légende by Reniè. 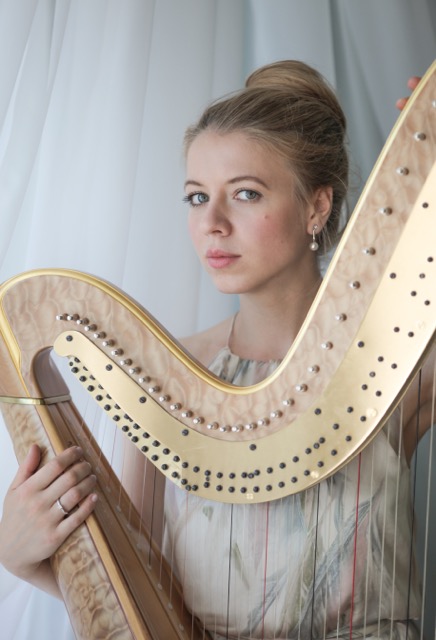 Oksana Sidyagina was born in Moscow in 1990. She has started her education at the class of teacher Ekaterina Vesnina. Since 2000 she studies with professor Emilia Moskvitina. In 2010 she has graduated from Moscow State Chopin College, currently she is doing master degree studying in Moscow State P.I.Tchaikovsky Conservatory. Her teacher is the eminent Russian harpist, Professor Emilia Moskvitina, one of the most celebrated harpists in Russia and recipient of the award, People’s Artist of Russia. She also took master-classes with such an outstanding harpist as Emmanuel Ceysson, Sivan Magen, Florence Sitruk, Irina Donskaya-Tischenko, Andrew Lawrence-King, Sandrine Chatron.

Oksana is the winner of five international competitions:

She also has received many other prizes including:

Since 2014 Oksana is the soloist of Saint-Petersburg Music House, whose aim is to represent the most talented young Russian musicians in Russia and beyond. In the context of Saint-Petersburg Music House programs for young musicians Oksana has played the premier of the Concerto for harp and orchestra by Henriette Renie in Samara. From the 2015 she collaborates with “Persimfans” as the member of the collective – the first ever orchestra without a conductor.

In 2018 on the harp festival in Moret-sur-Loing she performed solo with the orchestra under the button of Philippe Bernold.

Also as a soloist she has performed on such a prestigious venues as Brucknerhaus Concert Hall (Linz, Austria), Centre Culturel et Spirutel Orthodoxe Russe in Paris, France, Madrid Royal Conservatory (Madrid, Spain), and on many other different stages in France, Italy, Austria, Germany, Spain, Thailand, Slovakia, Uzbekistan, Ukraine. In Russia she has played in such prestigious venues as The Great, Small and Rachmaninov halls of Moscow Conservatory, Moscow International House of Music, Moscow Philharmonic Society, The Pushkin Museum and the Beloselsky-Belozersrky Palace, St Petersburg, Sochi Main Press Center, English Hall of St Petersburg Music House, on the stages many Philharmonic Societyies including Krasnoyarsk, Kislovodsk, Ekaterinburg, , Samara, Aseev’s Palace in Tambov and many others.

The repertoire of Oksana is just huge for her age – it includes colossal numbers of the pieces of absolutely different periods – from the baroque till just written. She has played a lot of Russian premier of different contemporary pieces.